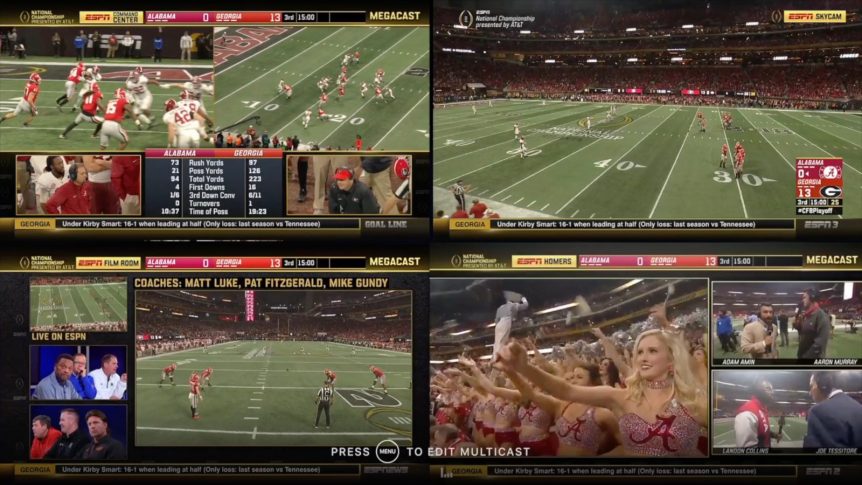 With Apple moving into cinema premieres, and just this month AMC Theatres challenging Netflix with a jump into the streaming wars, the field seems prime with the possibility for more disruption, melding, consolidation and fragmentation, before things settle.

Add to that list one more for good measure: the multicast.

Major sports leagues, who for decades have relied on exclusivity and singularity of channel, are finally catching up to the rest of the industry. They’re realizing they have more to gain from branching out to meet consumer’s needs and preferences, by airing live sports on multiple TV, digital and social avenues simultaneously, versus simply broadcasting through one live, linear feed.

It makes perfect sense. They should be where the 2019 eyeballs are, and while fans are still choosing to watch live sports on a linear TV sometimes, they are also choosing to watch their favorite game on a multitude of other devices. In other words, it’s about time that sports caught up.

Some obvious benefits of multicast include higher overall viewership, as is in the case with the NFL applying the experiment to Thursday night games, which now include broadcast (Fox), cable (NFL Network) and Spanish-Language TV (Fox Deportes) and streaming video (Amazon Prime Video).

Another multicast example is the NBA, which is loosening their reins, just a touch. They signed a deal with the Amazon-owned Twitch to live-stream minor league games, but what is fascinating is, they are also allowing Twitch personalities to co-stream games for their audience and provide their own commentary.

One major factor to consider: price points. Alternative channel rights are obviously still much less expensive than live TV rights, but that is starting to change. While live TV sports are still a good bet for a reliable live audience, those audiences are still shrinking, so distributors will have to continually weigh options as the gap between the two price points narrows.

Pundits have long claimed that live sports is the last untouchable bastion that will “save” linear television from absolute extinction. With this latest multicast news, it’s worth reconsidering that notion.

Grappling with how best to drive viewership across all services while personalizing your viewer’s experience? Get started with VuPulse today.